Shall wake up one day

To tear off all curtains

Another option is, that lousiness will pervade

until, engulfed by pastiche,

our bones dry up to juice-up the facades

That is the day on which you and I will get sold.

lonesome in the toil

of these weary days

in this deeply hurt world,

lions in caves, deep inside

slumber on and on

as one by one, they kill all love,

as humans, numbed to stone,

lay down rules, stern as no ship ever were,

that forgot how to bloom,

But that other, cold, craze,

shall ever be true.

andhakara, andhakara knocking at my door
what is there to be said anymore?
beloved shadows, forsaken rain, birdlike evening descends
andhakara, andhakara, have you come to make amends?
andhakara my hands and feet,
andhakara your soul
may beauty ever madden, screw every other goal
thus spake atindriyo at 2:55:00 PM No comments:

There are only two kinds of people in the world: us and them'

- thus they said everywhere as bits and pieces of my dark earth died
We have all seen how the evenings get so blue
'there must be something else, something that connects, yet, doesn't; that flickers
yet, doesn't' - we have thought
we have wept, seeking
that one last mad dance
hands moving in silence
'should it matter, or should it not?'
'walk in, or walk away'
- thus they thought everywhere as my dark earth died in bits and pieces
thus spake atindriyo at 12:01:00 PM No comments:

Come what may, stick to love
Even if the sun refuses to shine
And the flowers refuse to bloom
And the guns and the tanks refuse to stop
booming on and on
from the heart's haunted periphery
If there is to be a war
Let it be between those who love and those who hate
If there are to be many wars
Let us conquer those with love
In the fiercest of storms, in the foulest of times
When light and darkness makes abject circles
in our peninsulas of dejection, when the robins
and the thrushes refuse to fly, refuse to sing,
refuse to be, know this, that there is something
within and without, that will keep us going,
bounding, towards the edges and corners
of reckoning, and beyond
Come what may,
Refuse to cave in,
Because you are beautiful
Because love makes you so
And it ever will.
thus spake atindriyo at 1:05:00 PM No comments:

roaming, disinherited, incomprehensible
I am, who you are.
and us – mirrors.

and in the mirror, do you see the light -
of glowworms that must not glow bright -
on a guerrilla night?

the jungle-paths are full
the stormwatchers’ tower crumble
who are we? – echoes whirl

mist gets thicker on everything
everything is nothing, or else
nothing would ever make sense

some dream of magic
others stand to make sense
water flows. the moon rises. the earth ages.

and thus, having moved
in circles, we return – we turn
to being, to time and to space.

in this dot, shadows are dead
light is darkness and darkness is light
or else the wells wouldn’t fill

somewhere, a solar storm breaks
some catch a whiff
from the seas and dream of homes

the rest who went to know
met a broken bridge or two
and thought they would swim across.

for such, beloved, is the situation –
moonlight guards birds. birds guard cornices.
it is an aware night. it is a hungry night

What are these lives, living, eating, breathing –
cut and dried – sucked clean of blood and bile
by binaries,
on display from wall to wall?
Imagine yourself, in a coffee shop, nondescript
Your elbows pressed against the table
Your lips against the rim of an oft-stained mug
Your eyes – looking out – into the dull sameness
Of a stoic town – dank automobiles, sad trees
A lizard with its breast, belly and claws pressed, firmly
against the glass panes – who can say if the lizard is happy or sad,
reminiscing on a T-Rex past, when all was there to rule?

Tendencies of inheritance – some people have black eyes
some – brown.  Most trees have green chlorophyll. Some – red.

But to talk of trees is still a crime – people get shot for it
Do we see them, shot people – pasted from wall to wall –
of social media platforms, of coffee-shop windows?
We do not. We drag on – our frames and inheritances – of a headful of centuries
Reptiles and amphibians drag more – their blood is cold
We sift through pages – we learn to unlearn –
of Sisyphus, Jesus, Ahasver – our blood is warm – we can hear
the waves beating the shores in angst – we can hear ballads
from taverns and akharas – filling the country skies to brim –
but can we hear the moon breathing its sadness down? Could we ever, my love?

Let us close our eyes. Let us clasp our palms.
Let us return to where there is no returning – beyond
the ruby-glazed tracts of Rubicon. Beyond
histories made of greed and geographies made of the unknown
Beyond all pupils and pulpits – swords to rule and flags to be ruled by
Into that night – where the skies are made of earth
And the earth - of the skies! Ah what a night it was, it is!
Even the Buddha wept on that night
And all the trees and rivers wept with him! And then,
like a dream, like a flickering flame, like an instance,
it went by

And then, you open your eyes –
Maybe, you see a magic city, or a lonesome boat gliding
down a river that has won the battle against time
and where the sun always sets, or maybe just a great chunk
of darkness playing tic-tac-toe with itself – or maybe it’s still
that stained coffee-mug, the trees and the cars, the hopeless lizard
asking back its T-Rex ancestry – it can be anything. Why don’t you try?
thus spake atindriyo at 7:36:00 PM No comments: 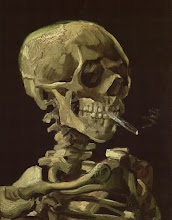 A Gift from a Gifted Friend 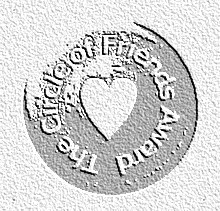